Sarawak is the city in Malaysia and Kuching is the capital and the most famous city. Kuching is the third capital of Sarawak and founded in 1827 by the representative of the Sultan of Brunei.There are many interesting and nice place that can be found in Sarawak.This article will provide you top 10 scenic location for Instagram in Sarawak.

Built in 1912 but officially opened as a museum in 1993, the Chinese History Museum was initially a court for the Chinese community in Kuching. The museum depicts the rich history of Sarawak’s various Chinese groups. Visitors will learn about their origins, traditional skills and culture through the exhibits here.

This is Sarawak’s most famous and beautiful beach. Damai, located on the Santubong Peninsula, is about 35 minutes away from Kuching. Besides the white sandy beaches to relax on, you can join in water sports such as jet-skiing and windsurfing. The rich jungle in the background is also suitable for trekking and climbing. Bird-watchers will enjoy sighting a diversity of birds.The types of birds you can find there are Sandpipers, Egrets, Terns, Collared kingfisher, the White-bellied Sea Eagle and also Brahminy Kites and others.

Fort Margherita is an old castle built in 1879 by Charles Brooke, Rajah of Sarawak situated in Kuching, Sarawak, Malaysia. The castle is a vital landmark and monument in Sarawak’s history which goes back to the Brooke Dynasty. The castle, built in the style of an English castle, was designed to defend Kuching from being attacked by pirates. It served as a Police Museum from 1971 before being handed over to the Sarawak state government and now is a tourist appeal in Kuching. The fort now houses the Brooke Gallery, an display showcasing the history of Sarawak under the Brooke Dynasty.

The Islamic Museum in Kuching, opened in 1992, was initially a Malay college but now houses seven galleries displaying components of the Islamic culture and religion. They are divided into History of Islam in Sarawak.Example,Islamic Architecture,Science, Technology, Economics, Education and Literature, Music, Costumes and Personal Ornaments, Weaponry, Decorative Arts, Domestic Utensils and a Quran Collection.

Sarawak’s capital, Kuching, is one of the several cities in Malaysian Borneo that escaped a hammering during WWII. Its memorable buildings, multi-racial society, excellent climate and position alongside the banks of the Sungai Sarawak river all contribute to the city’s laid-back charms.Kuching has an impressive history.The city was once ruled as a kingdom by British-Adventurer-come-Rajah, James Brooke, whose son, Charles, was responsible for building a lot of the structures that, along with its Chinese temples, mosques and waterfront, make Kuching such an interesting city to explore.Kuching can be divided into two regions, which are more or less distinct. The Chinese dominated south is a commercial residential area, while the north shore is predominantly Malay in character, with old kampong houses lining the river.There are numerous places of interest in and around the city, and while Kuching as a whole is spread out, its primary centre is compact and easily explored on foot. A popular place for travelers exploring Sarawak, the city also allure travelers with its nightlife, wide-ranging accommodations and delicious Chinese-Malay cuisine.

Longhouses are the traditional homes of Sarawak’s native groups. Each tribe has their own technique of design but the overall shape and architecture remain the same.Normally, a longhouse constitutes a run of interconnecting rooms built on stilts, covered by one roof and a verandah for common activities.Visitors who come will be greeted by a glass of rice wine or ‘tuak’ and entertained with a welcome dance. There are also options to spend the night in a longhouse.

Miri is emerging as one of Sarawak’s most in demand tourist destinations. This is because Miri is the way to several national parks, rivers and some of Borneo’s best diving sites. People from nearby Brunei always escape to Miri for a time of shopping and sight-seeing.

Completed in 1891, this old museum in Kuching is the permanent housing location for local native arts and crafts as well as collections of local animals. The ground floor is a gallery dedicated to Sarawak fauna, with the example of wildlife on display. The west wing, on the other hand, teaches about the history of the oil industry in Sarawak. At the first floor, various ethnographic artefacts are put on show such as models of traditional longhouses, musical instruments, variety kinds of fish and animal traps, handicrafts, boats and other things.

This little fishing village is located about 32 km away from Kuching. What makes this location historically significant are the archaeological findings in the region. Ancient Hindu and Buddhist rock carvings have been discovered around the Santubong River delta.

Sibu was named after a local fruit called ‘Sibau’, alike to a rambutan. Today, Sibu is a centre for eco-adventures and cultural experiences. Visitors can get rides from this town into distant areas by ferry to explore the rainforest and visit native communities. 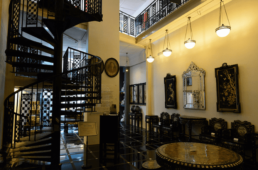 Top 10 Things To See In Penang